Estrogen, exercise and endorphins – the ups and down of menopause

I used to think that hot flashes (known as hot flushes in the UK) were a thing of fiction. I heard of women teachers flinging open the classroom window because they were burning up while their student froze. I had not experienced this and my mother seemed to pass through menopause without any outward symptoms. So, with youthful ignorance, I dismissed the cries of misery, deciding these were women with low tolerance for the normal discomforts of womanhood. Not any longer! Fifty came and went last year and although my husband, and many other men, may not want to know about it, I knew my menstrual cycle pattern was changing and I was surely perimenopausal. In January I began experiencing hot flashes myself. At first I thought I must be sick, running a fever, but slowly it dawned on me that these peculiar and discomforting episodes were, indeed, hot flashes. They don’t last very long, maybe a couple of minutes at the most. It’s almost like having hot goose bumps, a heated, prickling sensation on my arms, upper body and face. I don’t know if I turn red or not but I certainly feel like I glow, and perspiration breaks out on my forehead and upper lip; and then it’s gone. It happens several times a day and a couple of times a night. I wondered if there is a rhythm or pattern? What triggers them? 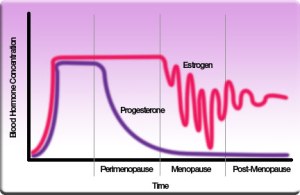 Estrogen and progesterone levels vary during a woman’s life. Both decrease during menopause but it is the drop in estrogen that appears cause hot flashes.

I turned to the internet for education and a refresher on female reproductive hormomes. The reproductive cycle is controlled by a handful of hormomes including follicle stimulating hormone (FSH), luteinizing hormome (LH), estrogen and progesterone. The rise in these hormones control ovulation but without implantation the levels fall and the menstrual cycle completes. At menopause the levels of estrogen and progesterone fall while LH and FSH rise.

The exact cause of hot flashes is a bit of an enigma but is presumably related to changes in reproductive hormones, especially estrogen. The drop in estrogen levels somehow adversely affects the hypothalamus, which is the thermostat center of the brain. With the menopausal estrogen drop the hypothalamus misreads the body temperature as too high and activates a variety of responses to cool the body, including surface blood vessel dilation, which allows heat loss through the skin, and sweating, a highly effective mechanism of heat loss. The estrogen drop may also reduce the thermoneutral zone – the range over which the body temperature can vary without triggering a cooling response. This may be why a hot drink can trigger a hot flash. The duration and frequency of hot flashes varies between women so there must be more to the story. Genetics? Environment? I don’t know what. Perhaps, since it appears that the change in estrogen level causes the issue, it is related to premenopausal estrogen levels and the degree of change.

I think I have been experiencing fairly mild hot flashes. I found a website where women are invited to describe their experience and its clear that some women are tormented by hot flashes occurring around the clock and disrupting their life and their sleep. These women are desperate for relief. The web is also awash with possible treatments to relieve the flashes, from hormone replacement therapy (HRT) to “natural” remedies such as plant based estrogens from soy, and black cohosh. Although hormone replacement therapy is effective in reducing hot flash frequency and severity, long-term studies show that combined estrogen and progesterone HRT increases a woman’s risk of heart attack, stroke and breast cancer. The increased breast cancer risk makes sense given that a woman’s lifetime exposure to estrogen is correlated with her risk of breast cancer. The non-prescription remedies have been less well studied but there is reasonable concern that they mimic estrogen and therefore may also increase the risk of breast and endometrial cancer.

So what is a woman to do? Talk with your doctor and consider your current condition in light of your overall breast cancer risk. There are good tools that can be used to estimates a woman’s breast cancer risk. For some women with low risk factors for breast cancer HRT may be an option to consider to relieve intolerable, debilitating hot flashes.

But don’t forget the benefits of exercise! Research has shown that regular exercise appears to be a promising alternative or add-on to estrogen therapy. Estrogen affects the level of endorphins, which may have a role in thermo regulation. Exercise can also increase endorphin levels and thus may decrease the incidence and severity of hot flashes. As my friends and blog readers may realize my current exercise level is far higher than it was eighteen months ago. I now spend about six hours a week exercising, including dog walking, ElliptiGOing and going to the gym, whereas previously a couple of hours of dog walking had been my main (only!) exercise. Not only am I exercising for longer but also at a higher intensity.

In spite of my increased exercise regimen I was suffering from hot flashes but, curiously, they ceased suddenly after our two days of long rides a couple of weekends ago. There have been many studies on endorphin levels during and after exercise; it appears that endorphin are released during exercise of a sufficient intensity and duration. Although there may be many other explanations I like to think that those twenty-six and thirty-five mile rides put me over some intensity threshold and gave me an endorphin boost that chased the flashes away! 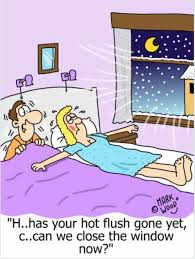 2 Responses to Estrogen, exercise and endorphins – the ups and down of menopause